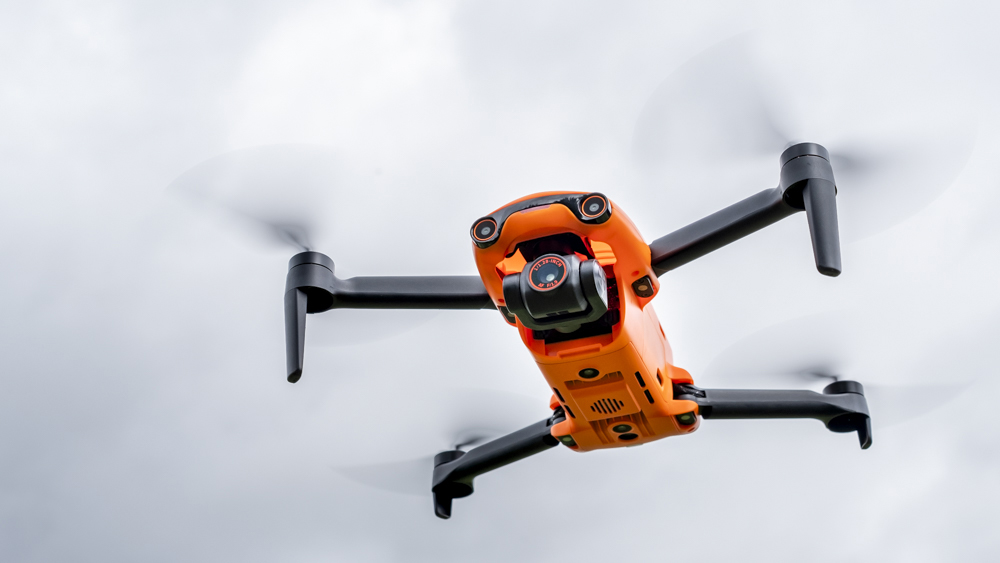 The palm-sized Autel EVO Nano+ offers advanced features and functionality more commonly seen in larger and more expensive drones while keeping its weight below 250g.  This puts it firmly within the most regulator-friendly drone category and one that’s quickly growing in popularity among consumers. So, with the flexibility to fly this small and lightweight drone in more locations than larger models, with fewer restrictions, is the Autel EVO Nano+ the perfect drone for you?

The Autel EVO Nano+ was the world’s first drone in the sub 250g category to offer collision avoidance and automated flight patterns for capturing professional-looking video with ease. Image quality for photos and videos is impressive thanks to the 12.5MP 1/1.28-inch sensor, while photo and video features make the drone suitable for beginners and professionals alike.

At £719 / $899 for the basic kit with one battery, or £859 / $1049 for the premium bundle with three batteries and additional useful accessories, it’s not a cheap drone; it does, however, offer many of the advanced features found in more advanced and expensive drones, but in an incredibly small and lightweight package. 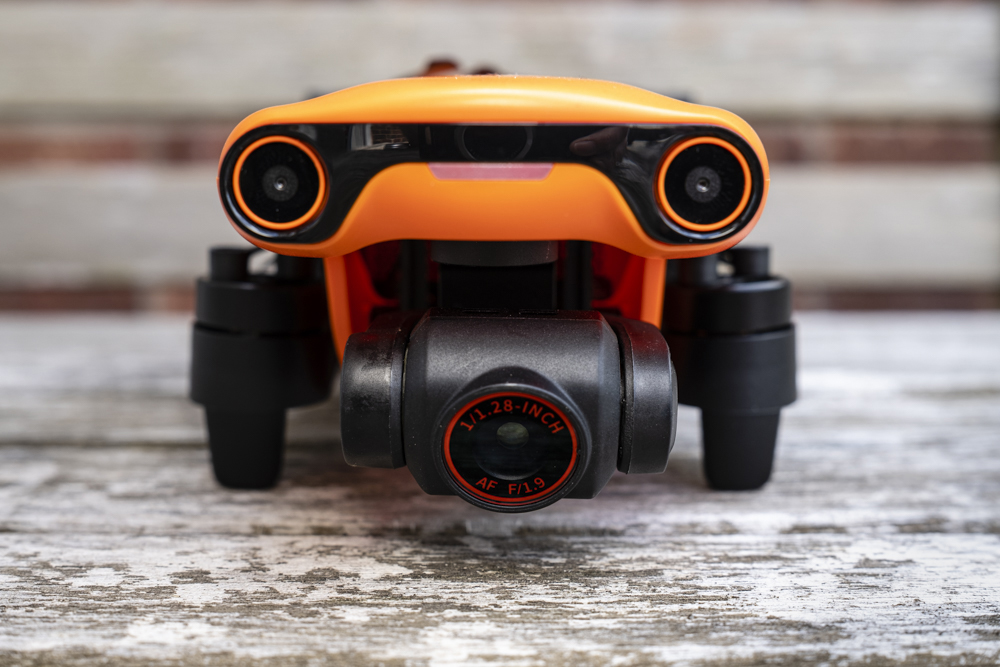 The Autel EVO Nano+ was released in January 2022 and was the world’s first sub 250g drone to offer collision avoidance. This was alongside automated cinematic flight modes enabling users to capture professional-looking aerial videos with ease.

The Autel EVO Nano+ is available in two kits, although the Premium bundle offers the best value for money alongside additional batteries and other useful accessories. The Standard Bundle costs £719 / $899 and includes the drone, a controller, one battery, a spare pair of propellors, a USB-C charging cable, spare propeller screws, a mini screwdriver and three phone cables.

The Premium Bundle comes with useful accessories you’re likely to need and includes everything in the Standard Bundle alongside two additional batteries, four additional pairs of propellers, a power adaptor, a three-battery charging hub and a propeller holder for £859 / $1049. 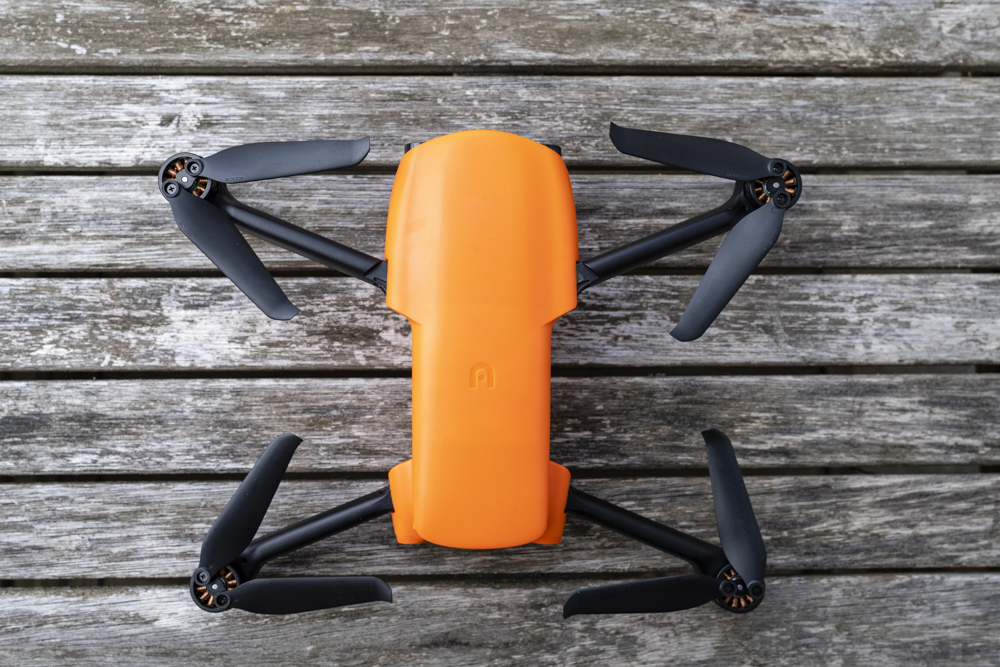 For more information about the Autel EVO Nano+ and to purchase this or other Autel drones in the UK and US visit https://www.autelpilot.com

To purchase the Autel EVO Nano+ from Amazon click here 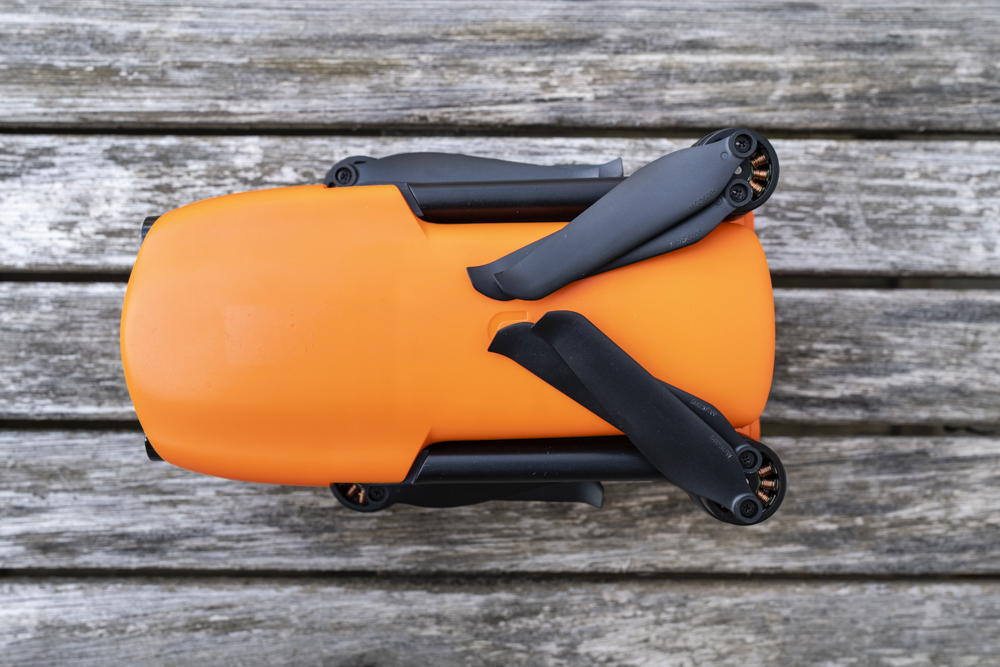 The build quality of this palm-sized drone is excellent overall, although it doesn’t feel as solid as the more advanced Autel EVO Lite+. And available in four colours: Classic Orange, Deep Space Grey, Blazing Red and Arctic White, you can select the finish that you like the look of most rather than being limited to grey, which is often the case with drones. 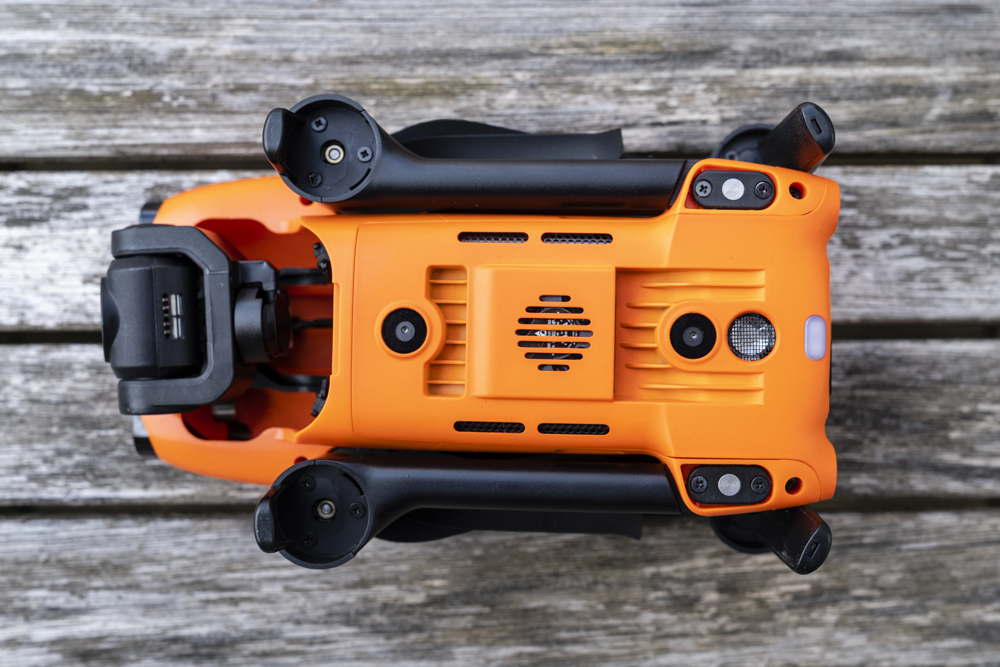 The Autel controller looks a little like an Xbox controller and offers six direct access controls including a customisable Function button where two functions can be assigned and accessed with a single or double press of the button. This is alongside the gimbal control so the controller is simply laid out and easy to use.

The controller doesn’t fold down and there’s nowhere to stow the thumb sticks when they’ve been removed for transportation, but it feels comfortable in the hands. The textured surface provides grip while the phone holder at the top of the controller can accommodate even the largest smartphones.

All camera controls and drone settings are accessed via the AutelSky app, which is available for both Android and iOS. The app is intuitively designed and easy to use overall, providing quick and easy access to the settings you need to capture photos and videos. You can also download videos from the drone to the app for basic video processing on the go. 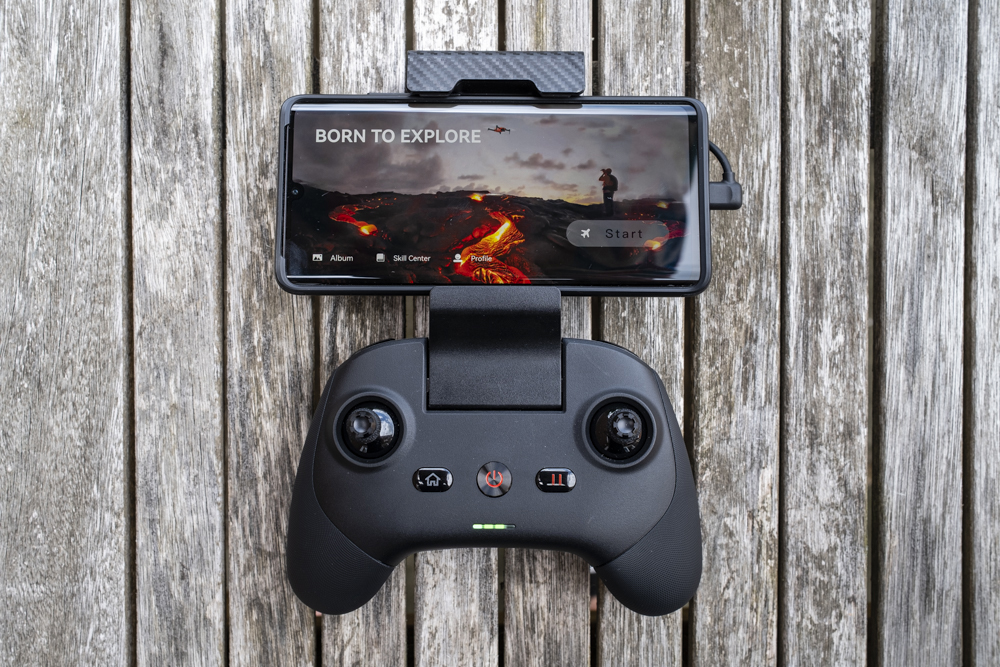 The headline feature of the Autel EVO Nano+ is the inclusion of collision avoidance that employs three-way binocular vision sensors on the front, bottom and rear of the drone. So, when obstacles are detected, the drone will initially slow down and then brake to avoid a collision. Collision avoidance is extremely sensitive, which is ideal for beginners but it does make it tricky to fly in complex environments such as woodland with it turned on.

These sensors also provide the ability to include automated flight patterns (Quickshots) for capturing professional-looking video at the touch of a button. These include Rocket, Fade Away, Orbit and Flick, and all work extremely well with the ability to capture video in either Auto or Pro (manual) mode. Another feature collision avoidance sensors allow for is Dynamic Track subject tracking, which is advertised, but is unavailable until the feature is delivered in a future firmware update.

With any drone, the camera is always an important feature, and the Autel EVO Nano+ camera houses a 12.5MP 1/1.28-inch RYYB (red yellow yellow blue) sensor and an equivalent focal length of 23mm alongside a fixed f/1.9 aperture. This fast aperture, combined with a sensor pixel size of 2.44 μm make the drone ideal for lowlight shooting.

When shooting stills photography, you can shoot in Raw, JPEG or both when shooting 12.5MP photos, although when shooting 50MP photos using the 8192×6144 Photo Resolution you’re limited to JPEG, unfortunately. Shooting modes, alongside 50MP which is only available in Single Shot mode, include Single Shot, Burst Timer, Interval, HDR and AEB (auto exposure bracketing).

When it comes to video, you can shoot 4K at 30/25/24 fps, 2.7K at 30/25/24 fps and FHD at 24/25/30/48/50/60 fps with a maximum bitrate of 100Mbps. Video can be captured in both Standard and D-Log colour profiles, which allows for straight out of camera footage and flat footage for colour grading and incorporating into professional workflows.

Time-lapse videos are available and you can set the drone to orbit a subject, leave it hovering, manually control flight during recording or start the drone’s movement manually and set the cruise mode to continue applying that flight without the need to use the controls. Time-lapse videos are captured in 4K and you can save individual images in Raw or JPEG alongside the video that’s created, or just the video.

Image quality from the Autel EVO Nano+ is impressive overall considering the small size of the camera and sensor. Although, the sensor is reasonably large for a drone of this size at 1/1.28-inch. The ISO range is 100-6400, and noise handling is excellent with an incremental rise in noise levels as the setting is increased, but images and videos remain usable at even the higher settings although lower settings are always the best option. 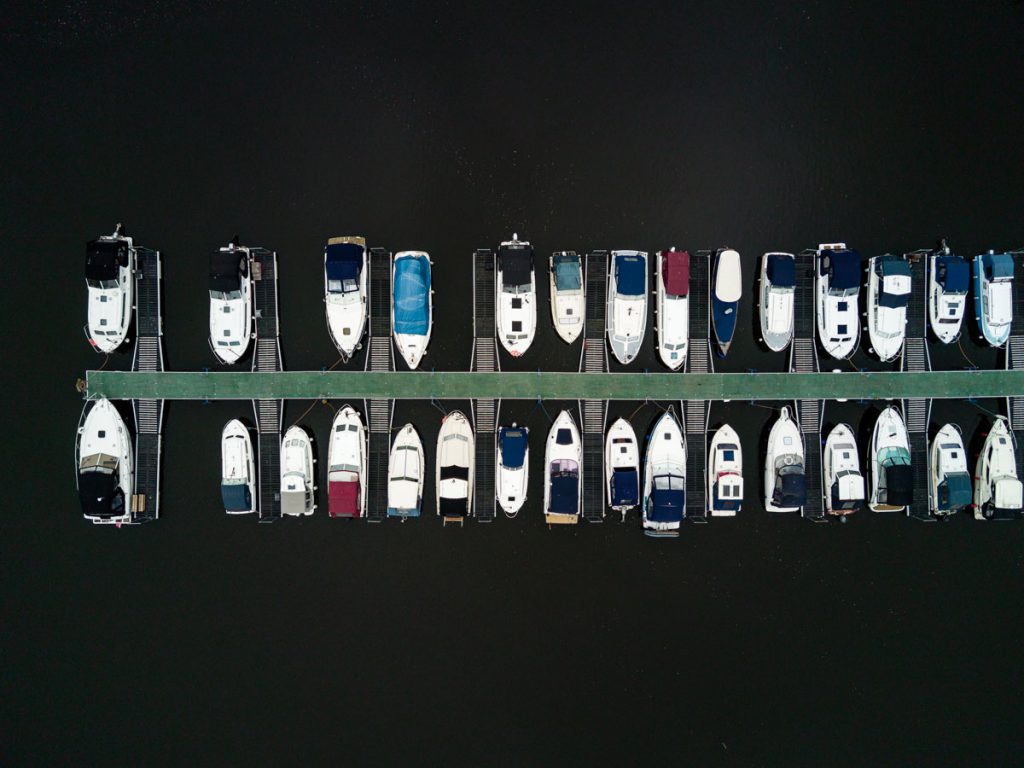 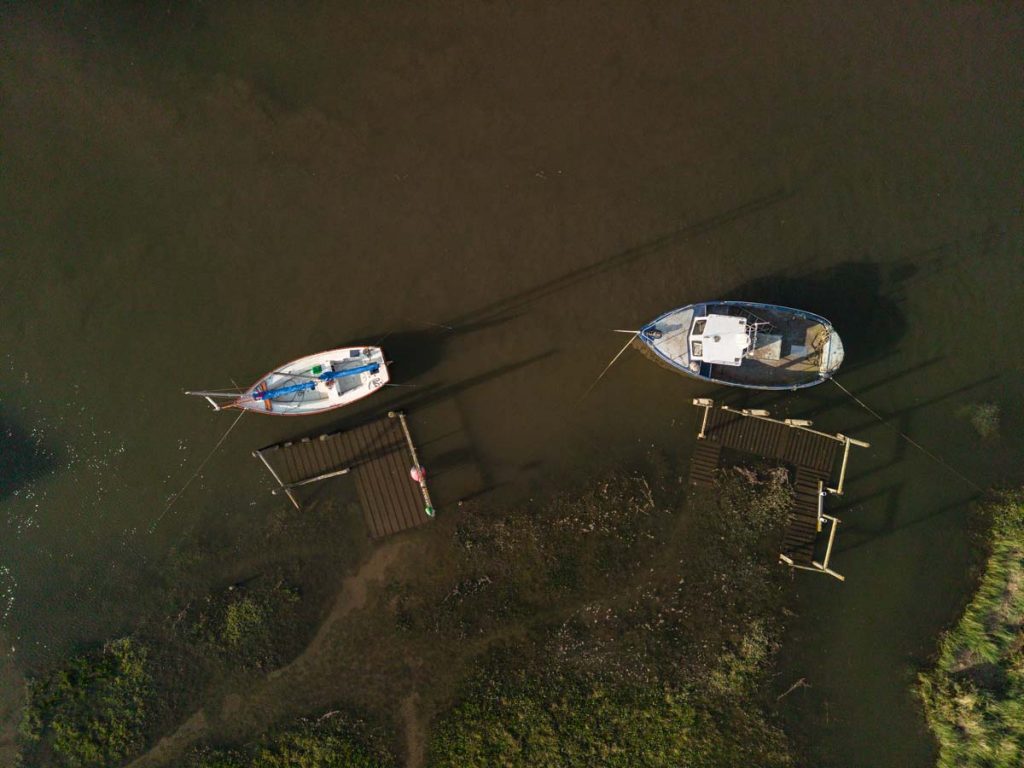 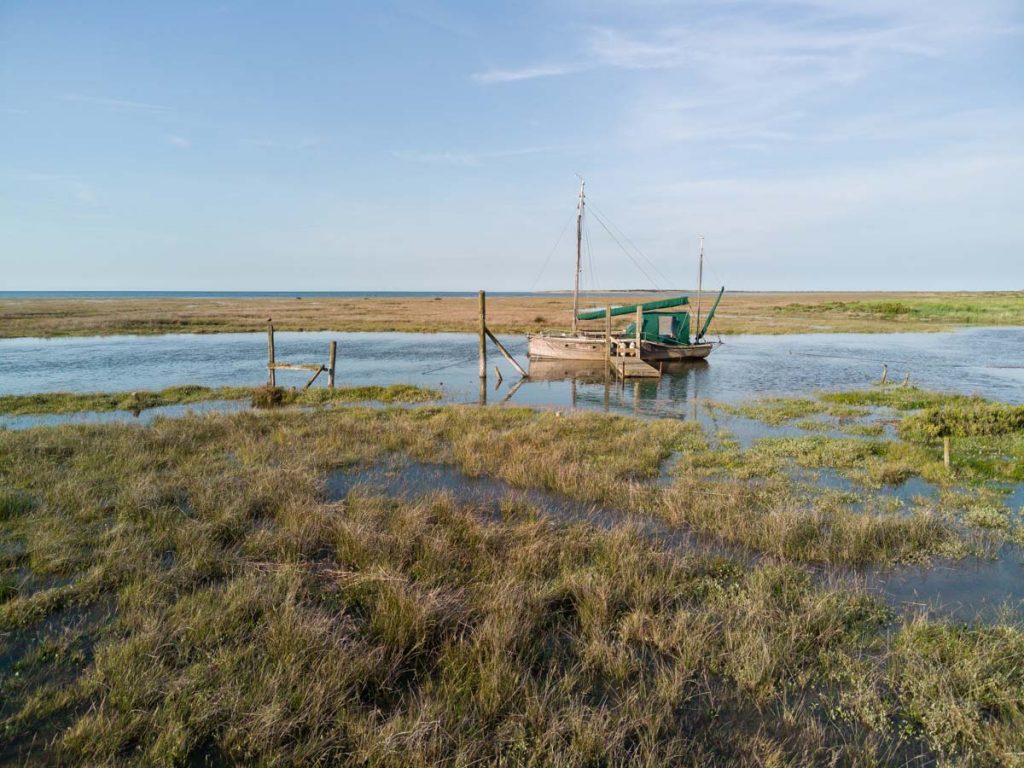 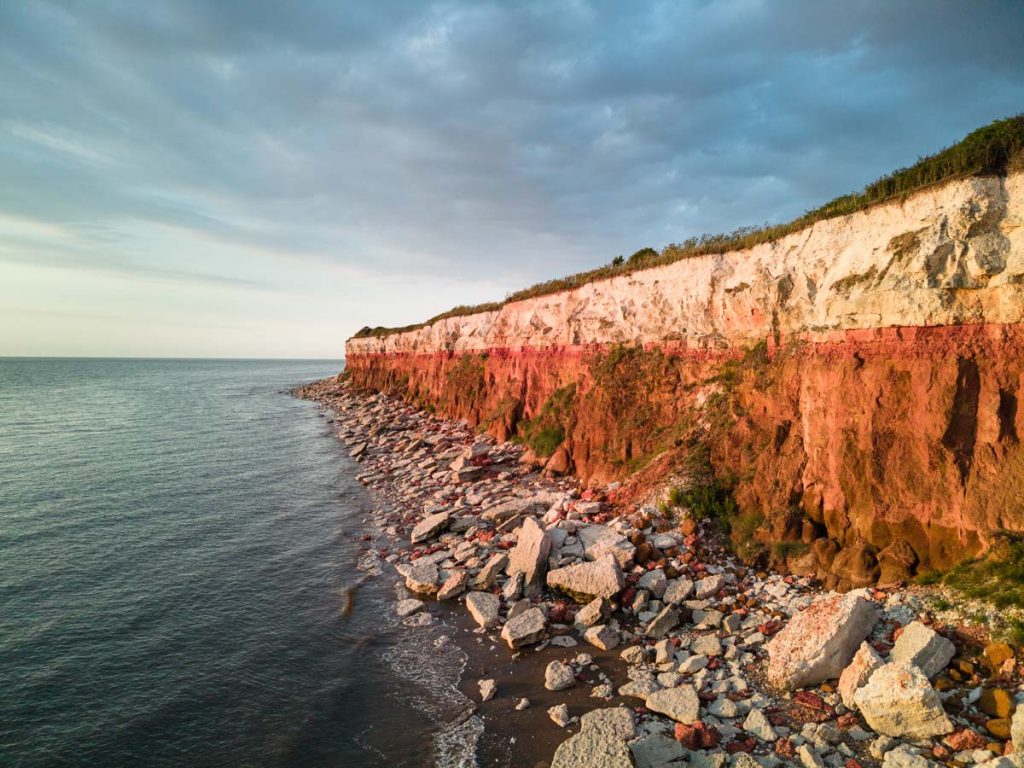 Click on any of the images to open the lightbox

Image quality when shooting photos is impressive overall, but it’s not without a few small issues. As is typical with most consumer drones, there’s a small amount of fall-off in sharpness towards the edges of the frame. Plus, there’s a visible vignette and chromatic aberration along subject edges, but these can be easily and effectively fixed when shooting in Raw and editing using software such as Adobe Lightroom and Affinity Photo etc.

White balance also has a tendency to look too cold (blue, green) when set to Auto, and even with a preset such as Daylight selected it can appear slightly too cold when shooting in the middle of the day which can be easily remedied during Raw processing. When shooting around golden hour, however, daylight white balance captures the warm light of the low sun beautifully.

Video image quality is excellent with no vignetting or chromatic aberration visible. Video is often better than stills with drones because less of the sensor and lens are used to capture 4K footage than stills. One point to consider is that with the fast f/1.9 aperture, you’ll need to use ND filters to maintain a correct shutter speed to capture smooth and natural-looking movement using the 180-rule. In a nutshell, this is where video is best captured at a shutter speed that’s roughly twice the amount of the frame rate eg. 30fps at 1/60sec.

The video above was shot at fast shutter speeds because ND filters were unavailable so the footage is a little choppy, although you can still see the overall image quality produced by the camera. No adjustments were made to the video – it’s straight out of camera.

In terms of flight, the Autel EVO Nano+ is responsive and stable in the air. It’s rated at level 5 wind resistance (up to 24mph), and flight in windy conditions is possible but when gusts are over 20mph the drone can struggle. That said, sub 250g drones, in general, aren’t hugely powerful and are typically suited to calmer conditions. 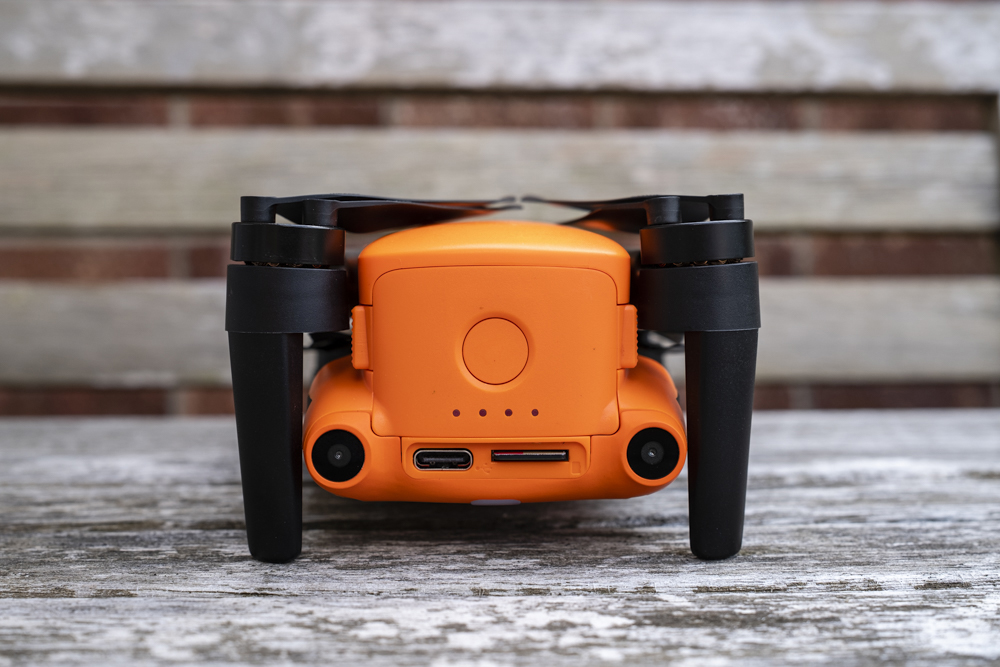 Flying in windier conditions will inevitably use up more battery power. And although the Autel EVO Nano+’s small 2250 mAh batteries are advertised to provide up to 28 minutes of flight time, in real-world conditions expect flight times to last around 20 minutes per battery when the RTH (return to home) is set to 25% remaining battery power. This can be edited to a lower charge in the AutelSky app, but it’s safest to leave this at the default 25%.

If you’re looking for a sub 250g drone that has advanced features in a small and lightweight package, the Nano+ is worth considering. Collision avoidance is a much-welcomed feature that makes flights safer. Plus, the Quickshots automated flight patterns that this function delivers are fantastic for capturing professional-looking video at the touch of a button.

Image quality for photos and videos is impressive overall thanks to the 12.5MP 1/1.28-inch sensor, while photo and video features available make the drone suitable for beginners and professionals alike. Photo image quality isn’t perfect, but minor issues are easy to remedy during post-processing when shooting in Raw format.

At £719 / $899 for the basic kit with one battery, or £859 / $1049 for the premium bundle with three batteries and additional accessories, it’s not an inexpensive drone but it offers many of the features found in larger and more advanced drones but in an incredibly small and lightweight package.

For more information about the Autel EVO Nano+ and to purchase this or other Autel drones in the UK and US visit https://www.autelpilot.com

To purchase the Autel EVO Nano+ from Amazon click here 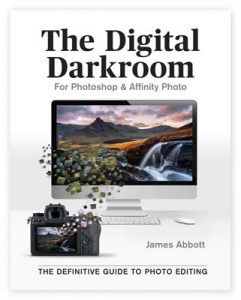 Improve your photo editing skills in Adobe Photoshop and Affinity Photo with The Digital Darkroom: The Definitive Guide to Photo Editing

This website uses cookies to improve your experience while you navigate through the website. Out of these, the cookies that are categorized as necessary are stored on your browser as they are essential for the working of basic functionalities of the website. We also use third-party cookies that help us analyze and understand how you use this website. These cookies will be stored in your browser only with your consent. You also have the option to opt-out of these cookies. But opting out of some of these cookies may affect your browsing experience.
Necessary Always Enabled
Necessary cookies are absolutely essential for the website to function properly. This category only includes cookies that ensures basic functionalities and security features of the website. These cookies do not store any personal information.
Non-necessary
Any cookies that may not be particularly necessary for the website to function and is used specifically to collect user personal data via analytics, ads, other embedded contents are termed as non-necessary cookies. It is mandatory to procure user consent prior to running these cookies on your website.
SAVE & ACCEPT